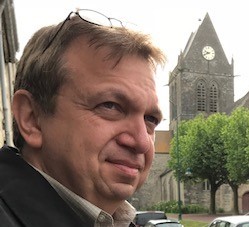 The Heroes of Sainte-Mère-Église is J. D. Keene’s first novel and
was born from his passion for history. Although initial ideas were set to
paper in early 2018, it didn’t come to life until he visited the village of Sainte-Mère-Église in Normandy France. While there, the story began to emerge in his imagination.

He is currently working on a short story, The Orphan of Angoville-au-
Plain which is based on the true-life experience of thirteen-year-old Paul
Langeard. During the D-Day invasion—with his village in the center of intense fighting between German soldiers and American Airborne units, Paul Langeard shows remarkable courage as war leaves him as the lone
survivor of his seven-member family.

J.D. Keene lives in Virginia, U.S.A with his wife Katie.